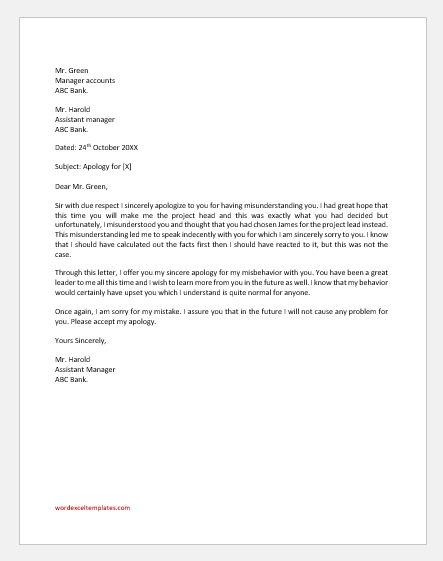 Mistakes can be made by anyone either intentionally or unintentionally, but the good thing is that you not only take responsibility for what you have done by readily accepting your mistake but also go for an apology. Making an apology not only makes you good in the eyes of others but it also makes them feel that you value them as an important part of your life.

In our daily life, we come across many people some of which you know very well and some you barely know about. In both cases, if you somehow become a reason for hurting the other, you should apologize for your act of hurting the person by saying sorry. This is an act that is accepted in routine matters but in organizations, it is not the case.

While working in an organization if you somehow commit a mistake that has hurt the other person’s sentiments you need to give a written apology for that depending upon the seriousness of the mistake done by you. This apology is duly written in a letter known as the Letter of Apology.

The letter of apology is written by an employee to his employer for his mistake that has hurt his employer. In the letter, the employee accepts his mistake and then apologizes for the same. The letter should be written in a very polite tone as you are at fault thus apologizing for your mistake. Your selection of words should be such that it makes the employer realize that you are accepting your mistake sincerely and value the relationship of yours with your employer by apologizing to him.

Through an apology letter, an employee takes the first step towards resolving issues between him and his employer to make things work better in the future for both. The employee should avoid giving baseless excuses behind his mistake.

Sir with due respect I sincerely apologize to you for having misunderstanding you. I had great hope that this time you will make me the project head and this was exactly what you had decided but unfortunately, I misunderstood you and thought that you had chosen James for the project lead instead. This misunderstanding led me to speak indecently with you for which I am sincerely sorry to you. I know that I should have calculated out the facts first then I should have reacted to it, but this was not the case.

Through this letter, I offer you my sincere apology for my misbehavior with you. You have been a great leader to me all this time and I wish to learn more from you in the future as well. I know that my behavior would certainly have upset you which I understand is quite normal for anyone.

Once again I am sorry for my mistake. I assure you that in the future I will not cause any problem for you. Please accept my apology.