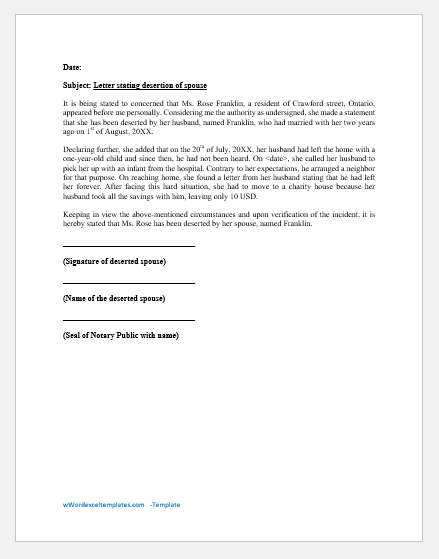 When a person terminates the marriage with a spouse, the desertion occurs. The termination may be due to willfully abandoning the spouse or being left by the spouse.

Although there are very firm and strong laws of divorce, there are some requirements required to be fulfilled when it comes to terminating the marriage. For example, any person who seeks the divorce should be able to provide those grounds on which he can be permitted for divorce.

The divorce is divided into the fault and no-fault divorce categories. When the divorce occurs due to no fault, the state recognizes this divorce as desertion.

What is affidavit of desertion of spouse?

When to use the affidavit of desertion?

As a matter of fact, no one wants to be abandoned by his/her spouse. If this happens, the law of every country gives the right to that the abandoned person to apply for a divorce on the basis of desertion.

What are the benefits of the affidavit of the desertion of a spouse?

There are some benefits for the person who swears on the desertion of spouse:

It is being stated to concerned that Ms. Rose Franklin, a resident of Crawford street, Ontario, appeared before me personally. Considering the authority as undersigned, she made a statement that she has been deserted by her husband, named Franklin, who had married her two years ago on the 1st of August, 20XX.

Declaring further, she added that on the 20th of July, 20XX, her husband had left the home with a one-year-old child and since then, he had not been heard. On <date>, she called her husband to pick her up with an infant from the hospital. Contrary to her expectations, he arranged a neighbor for that purpose. On reaching home, she found a letter from her husband stating that he had left her forever. After facing this hard situation, she had to move to a charity house because her husband took all the savings with him, leaving only 10 USD.

Keeping in view the above-mentioned circumstances and upon verification of the incident, it is hereby stated that Ms. Rose has been deserted by her spouse, named Franklin.

(Name of the deserted spouse)

(Seal of Notary Public with name)