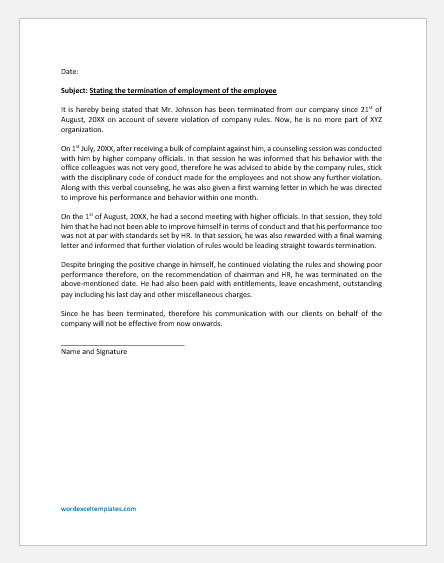 An affidavit is a written statement that is confirmed by oath and affirmation. It can be used in the form of evidence in court. This can be given in different circumstances like when employment is being terminated for a certain employee.

What is an Affidavit in Support of Employment Termination?

An affidavit in support of employment termination is a written statement that is given to an employee terminating their employment. There may be some reasons for this, like wrong behavior, rudeness to customers, etc.

What to include in the affidavit?

If you need to make an affidavit in support of employment termination you can consider the below points:

The advantages of an affidavit in support of employment termination are:

An affidavit in support of employment termination is an important document that needs to be created with much care. You need to use the proper wording and make it professional as well.

Subject: Stating the termination of employment of the employee

It is hereby being stated that Mr. Johnson has been terminated from our company since the 21st of August, 20XX on account of severe violation of company rules. Now, he is no more part of the XYZ organization.

On 1st July, 20XX, after receiving a bulk of complaints against him, a counseling session was conducted with him by higher company officials. In that session he was informed that his behavior with the office colleagues was not very good, therefore he was advised to abide by the company rules, stick with the disciplinary code of conduct made for the employees and not show any further violations. Along with this verbal counseling, he was also given a first warning letter in which he was directed to improve his performance and behavior within one month.

On the 1st of August, 20XX, he had a second meeting with higher officials. In that session, they told him that he had not been able to improve himself in terms of conduct and that his performance too was not at par with standards set by HR. In that session, he was also rewarded with a final warning letter and informed that further violation of rules would be leading straight toward termination.

Despite bringing a positive change in himself, he continued violating the rules and showing poor performance therefore, on the recommendation of the chairman and HR, he was terminated on the above-mentioned date. He had also been paid with entitlements, leave encashment, outstanding pay including his last day, and other miscellaneous charges.

Since he has been terminated, therefore his communication with our clients on behalf of the company will not be effective from now onwards.