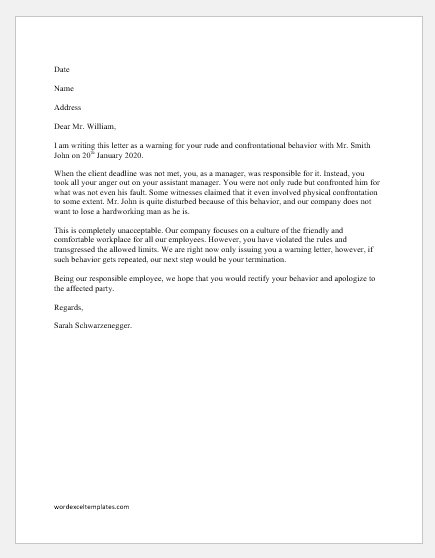 When an employee shows unprofessional behavior at the workplace, the management cannot ignore it, as it impacts the working environment, other employees and the overall company productivity. In addition, everyone starts getting involved in unacceptable behavior, if timely action is not taken for the wrong behavior of one employee.

Usually, if the situation is not severe, a company tries to give an oral warning to the employee. If it does not work, it issues a written warning letter, which can be followed by harsh consequences, if the behavior rectification is not done by the employee.

Rude and confrontational behavior is offensive, and companies do not encourage it. There are often stated rules of acceptable behavior in the employee handbook, that need to be adhered to by the employees while working. However, if an employee affects other employees or the company environment, the management is forced to take a step.

The warning letter for being rude and confrontational may include varying details as per the circumstances and company requirements. However, the general details added are:

The written warning is kept in the employee records for any future reference, and it affects the employee’s reputation and yearly evaluation, which is why employees try to avoid getting warning letters.

I am writing this letter as a warning for your rude and confrontational behavior with Mr. Smith John on 20th January 2020.

When the client deadline was not met, you, as a manager, was responsible for it. Instead, you took all your anger out on your assistant manager. You were not only rude but confronted him for what was not even his fault. Some witnesses claimed that it even involved physical confrontation to some extent. Mr. John is quite disturbed because of this behavior, and our company does not want to lose a hardworking man as he is.

This is completely unacceptable. Our company focuses on the culture of the friendly and comfortable workplace for all our employees. However, you have violated the rules and transgressed the allowed limits. We are right now only issuing you a warning letter, however, if such behavior gets repeated, our next step would be your termination.

Being our responsible employee, we hope that you would rectify your behavior and apologize to the affected party.