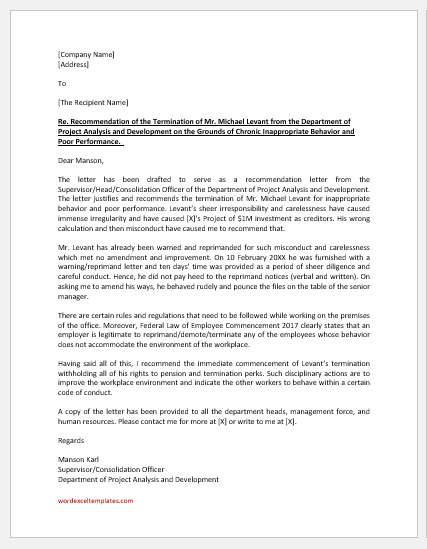 Re. Recommendation for the Demotion on Account of Rolling Out the Confidence and Breaching Employees’ Confidentiality Rights According to the C-701 Clause of Employees’ Rights Protection 2010

This letter is to serve as a recommendation to the demotion of Mr. Joseph Michael from the Department of Tax and Finance. According to the C-701 Clause of Employees’ Rights Protection 2010, all the employees are liable to keep important information of the company confidential. It may include project management, contractual details, or other internal affairs of the company.

Such acts committed by an employee can cause revealer’s reprimand in the verbal and written medium. Hence, if not reprimanded, certain disciplinary actions can be taken likewise depending on the gravity of the problem produced.

On 23rd January 20XX, it was reported in the General Management that Mr. Joseph Michael has been working with Human Resource due to a lack of available manpower. The report stated that he has been accused of revealing important information about [X]. Some of the personal credentials were disclosed for inappropriate use. He was reprimanded verbally, and a written warning note was also sent to him (Please find the copy attached).

In the warning letter, he was warned of his immoral and deliberately illegal action and was also told that the warning will lead to strict disciplinary action if not abstained.

I am regretful to state that Mr. Joseph has committed the same act again. He has also confessed that it was done by him that is not acceptable after giving one verbal and one written warning and deterred. Hence, it has been decided by the supervisory committee to take up strict disciplinary measures against Mr. Joseph so that any more acts like this can be halted.

A copy of this letter has been sent to the Senior General Manager, Assistant Manager, Managing Director, and Supervisors of all of the departments. 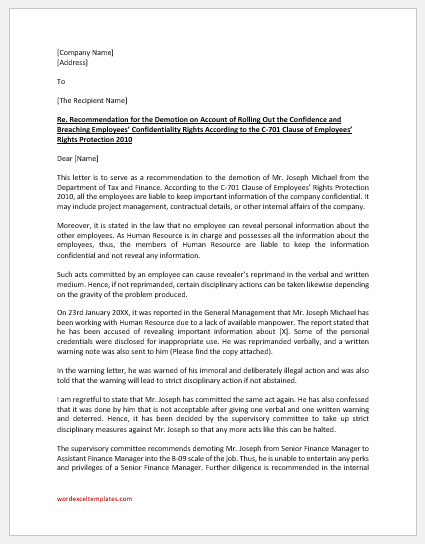 Re. Recommendation of the Termination of Mr. Michael Levant from the Department of Project Analysis and Development on the Grounds of Chronic Inappropriate Behavior and Poor Performance.

The letter has been drafted to serve as a recommendation letter from the Supervisor/Head/Consolidation Officer of the Department of Project Analysis and Development. The letter justifies and recommends the termination of Mr. Michael Levant for inappropriate behavior and poor performance.

Levant’s sheer irresponsibility and carelessness have caused immense irregularity and have caused [X]’s Project of $1M investment as creditors. His wrong calculation and then misconduct have caused me to recommend that.

Mr. Levant has already been warned and reprimanded for such misconduct and carelessness which met no amendment and improvement. On 10 February 20XX he was furnished with a warning/reprimand letter and ten days’ time was provided as a period of sheer diligence and careful conduct.

Hence, he did not pay heed to the reprimand notices (verbal and written). On asking me to amend his ways, he behaved rudely and pounce the files on the table of the senior manager.

There are certain rules and regulations that need to be followed while working on the premises of the office. Moreover, Federal Law of Employee Commencement 2017 clearly states that an employer is legitimate to reprimand/demote/terminate any of the employees whose behavior does not accommodate the environment of the workplace.

Having said all of this, I recommend the immediate commencement of Levant’s termination withholding all of his rights to pension and termination perks. Such disciplinary actions are to improve the workplace environment and indicate the other workers to behave within a certain code of conduct.

A copy of the letter has been provided to all the department heads, management force, and human resources. Please contact me for more at [X] or write to me at [X].