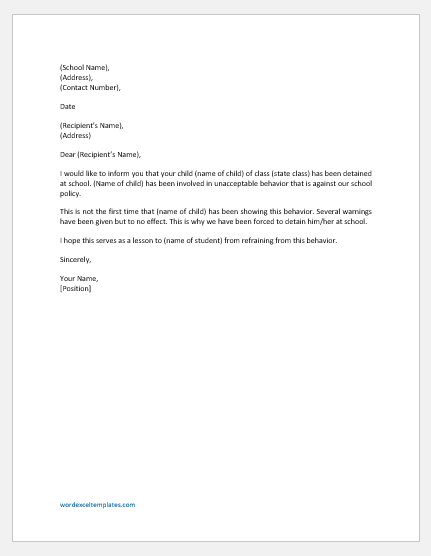 Detention is a process in which students are confined in a school’s building as a punishment. This kind of detention is usually considered as a consequence of violating the policies of the school or any other violation. Some schools also detain students at some undesirable places so that they can work on their academic performance. Regardless of the reason behind confining a student to a particular place by school’s authorities, a school is always intended to improve the performance and behavior of the student.

When a teacher of the kid wants to promote good behavior and prevent students from indulging in bullying, they can detain students who don’t seem to show good behavior.

What is a letter informing about the detention of a child?

The imprisonment of the child is usually done after school hours. It is the responsibility of the school to write a letter to parents of children in confinement so that they can be informed about this decision of the school. Parents wait at home for their child after school. They get worried if the child does not reach home in time. When they receive this letter, they come to know where their child is and what made him stay there.

When to write a letter to parents of children in confinement of the school?

A school usually keeps the child in confinement for a few hours after school. Whenever the school takes this decision, it should write this letter to parents to inform them. The school should also write this letter when the school is supposed to be working on the behavior or performance of the child after regular school hours.

How to write the letter informing confinement?

As a part of the school’s management, you are required to write a letter in such a way that you can communicate the information in the right way. So, you need to know how to write this letter and what point you should keep in mind:

State the decision of the school about child’s imprisonment:

In this letter, the parents should be informed in the beginning that their child has been made to stay in the school after school hours for a particular duration of time. The number of hours the detention will continue should be specified in the letter.

Parents of the child might want to know what compelled the school’s authorities to take that decision because sometimes, they are not aware of their child’s personality and attitude at school. So, through this letter, they come to know about the problem with their child. If there has been an unpleasant incident that took place and caused the child to remain in confinement, the school should elaborate on that incident in detail.

At the end of this letter, you should try to close the letter in an efficacious way. If there are some instructions that you want to give to parents, do mention them in the letter. Thank the reader at the end for showing cooperation and support at the end.

Some people fail to write a professional-looking letter because they don’t remember the following points:

I would like to inform you that your child (name of child) of class (state class) has been detained at school. (Name of child) has been involved in unacceptable behavior that is against our school policy.

This is not the first time that (name of child) has been showing this behavior. Several warnings have been given but to no effect. This is why we have been forced to detain him/her at school.

I hope this serves as a lesson to (name of student) from refraining from this behavior.