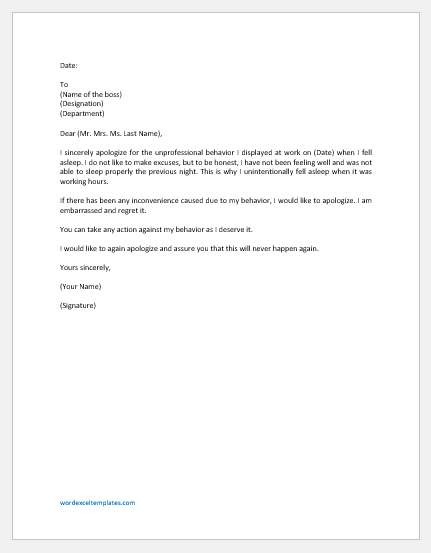 We often have to apologize for many things while we are on duty. We are expected to behave in a certain way and when we don’t, we feel embarrassed. It is very common for employers to face the situation in which their employees sleep while being on duty. This is generally not a serious offense and employers are always likely to forgive their employees when they make such a mistake. However, if the employee doesn’t seem to correct his behavior, he might have to face ramifications. Therefore, you must apologize for being an employee and must reassure your boss that you will not do that again.

Sleeping at work has many reasons. Some people sleep when they have not been taking proper rest while some sleep because of sheer negligence. Most of the employees sleep at work when their boss is not around. Regardless of the reason, such employees must say sorry because this is what they are expected to do once they are caught dozing off in the office.

What is the benefit of writing the apology letter for sleeping in the office?

Writing an apology to the boss has many benefits:

Guidelines for writing an apology letter:

Apology in the beginning:

As soon as you start the letter, write an apology statement to let the reader know that you are regretful due to sleeping at work. Mention the date and day on which this happened. If it was a shift of work, mention the details of that shift. Along with an apology statement, let the reader know what you have realized and what has made you ruminate on the act of sleeping while you are on duty. Such a statement will make the reader feel that you are sorry for whatever has happened.

Most people are apologetic when they write an apology letter. This makes the reader feel that their wrongdoing is likely to occur in the future also. In some cases, because the employee does not write this letter appropriately, he is fired from the job. So, you should be in a better position to express the regret that you have felt. Also, make the reader know that you are embarrassed also on your negligence.

Although apologizing also means that you hold no one accountable but yourself, it is recommended to explicitly say that you own your actions and tell how you are going to compensate for the loss the company has put up with due to you sleeping on duty.

Reassure that you won’t repeat the mistake:

Sometimes, the reader needs nothing but reassurance from your side that you will not sleep again on your duty. After all, it is always more welcoming to change your behavior when you are sorry after having done something unlawful.

To
(Name of the boss)
(Designation)
(Department)

I sincerely apologize for the unprofessional behavior I displayed at work on (Date) when I fell asleep. I do not like to make excuses, but to be honest, I have not been feeling well and was not able to sleep properly the previous night. This is why I unintentionally fell asleep when it was working hours.

If there has been any inconvenience caused due to my behavior, I would like to apologize. I am embarrassed and regret it.

You can take any action against my behavior as I deserve it.

I would like to again apologize and assure you that this will never happen again.