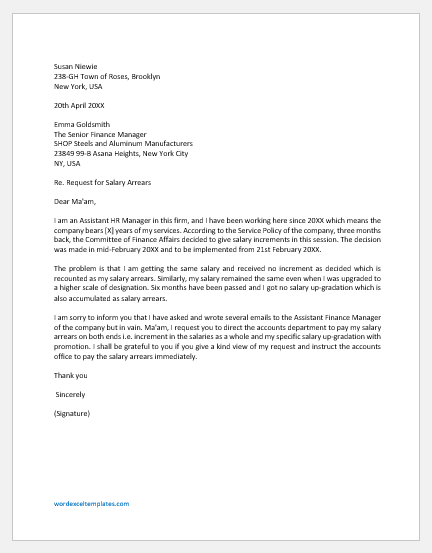 A letter asking for salary arrears is a letter which is written to the finance manager, CEO, Managing Director, or any other authoritative person by the employee whose salary arrears are still unliquidated. Salary arrear is the portion of salary that is pending at the end of the company.

For example, if the committee of the council in the company decides some sort of allowance or salary increase which is to be implemented on a specific date but not made practically followed up due to certain reasons. Thus, that specific accumulated amount is salary arrear payable to the employee by the company.

Request letter for the salary arrears should be penned down in a genteel manner and it should not sound harsh or embarrassingly straightforward. The letter should run in the following way:

The following is a sample letter of this kind which can be used by doing necessary trivial changes.

Re. Request for Salary Arrears

I am an Assistant HR Manager in this firm, and I have been working here since 20XX which means the company bears [X] years of my services. According to the Service Policy of the company, three months back, the Committee of Finance Affairs decided to give salary increments in this session. The decision was made in mid-February 20XX and to be implemented from 21st February 20XX.

The problem is that I am getting the same salary and received no increment as decided which is recounted as my salary arrears. Similarly, my salary remained the same even when I was upgraded to a higher scale of designation. Six months have been passed and I got no salary up-gradation which is also accumulated as salary arrears.

I am sorry to inform you that I have asked and wrote several emails to the Assistant Finance Manager of the company but in vain. Ma’am, I request you to direct the accounts department to pay my salary arrears on both ends i.e. increment in the salaries as a whole and my specific salary up-gradation with promotion. I shall be grateful to you if you give a kind view of my request and instruct the accounts office to pay the salary arrears immediately.