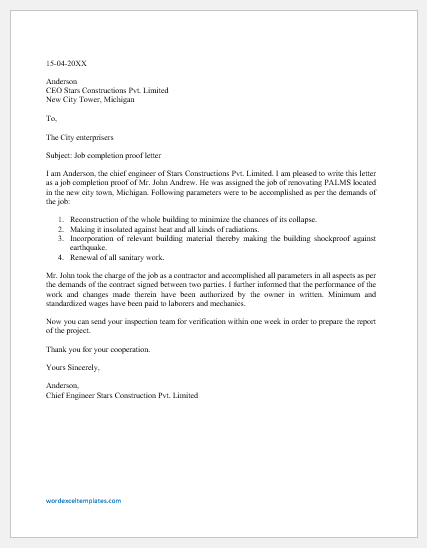 Job completion proof letter is a document written by the head of a company to another company to whom a task was assigned to complete. When two companies signed a contract to complete work usually an agreement or terms are decided which must be followed until the task is complete. On completion of the task, it is mandatory to issue a job completion certificate to the company for successfully completing the project under agreed terms.

A job completion letter can also be written within an organization. In a situation when a project manager awards a project to an employee and he finds it has been completed on time the letter can be written in favor of the employee. The letter acknowledges that the work has been completed successfully on time following given instructions. The letter is a valuable addition to the portfolio of an employee which proves worth in career growth.

This letter is being written as a job completion proof of Mr. Andrew Hudson. I am pleased to inform you that the project titled ‘Strengthening and reconstruction of New Town Michigan Roads’ has been completed under his supervision efficiently and well before time. There were a lot of places where roads had to be demolished for reconstruction purposes. Thereafter, these were revamped in order to meet the client’s demands. The job was supposed to be done within three weeks but owing to the hardworking and able team, it was done one week prior to the deadline. Whole work, after its completion, was evaluated by the quality assurance team of our department and they have also issued us a satisfactory report.

As per the demands of the contract, all TORs have been complied with. A report in this regard is also being shared along with this letter. You are warmly welcome to inspect our work and give your feedback keeping the limit of two weeks in mind. It will be a pleasure for the company to answer any query raised by your side if any. 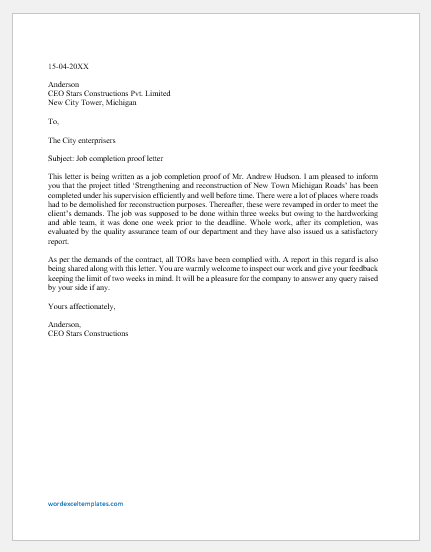 I am Anderson, the chief engineer of Stars Constructions Pvt. Limited. I am pleased to write this letter as a job completion proof of Mr. John Andrew. He was assigned the job of renovating PALMS located in the new city town, Michigan. Following parameters were to be accomplished as per the demands of the job:

Mr. John took the charge of the job as a contractor and accomplished all parameters in all aspects as per the demands of the contract signed between two parties. I further informed that the performance of the work and changes made therein have been authorized by the owner in written. Minimum and standardized wages have been paid to laborers and mechanics.

Now you can send your inspection team for verification within one week in order to prepare the report of the project.

Thank you for your cooperation.