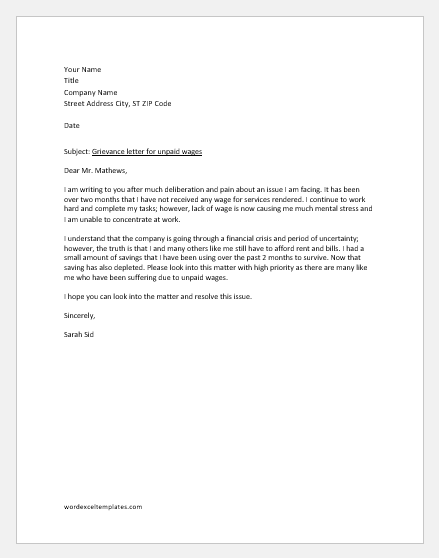 A grievance letter is written by an employee when there is a breach of employee rights or the employee feels he/she has been deprived of their legal right. Any complaint when submitted formally is called a grievance letter. Grievance letters can be written for many reasons such as:

Any other complaint that an employee may have that seriously affects his ability and motivation to work can be addressed in a grievance letter.

Situation 1: Suppose you have not received your wage or salary for the past three months. The organization you are working for claims to be going through a financial crisis and unable to manage its employee’s wages. Given the economic situation, employees are incapable of finding an alternative job and therefore, have no choice but to stick with the current employer. You would thus write a grievance letter to the HR department, asking the company for unpaid wages so you can pay for food and bills.

Situation 2: Another scenario might be that the company erroneously failed to make your transfer along with other employees. In many organizations, the processes are long and often if such an error occurs, organizations do not make individual transactions. The payment dates are fixed and if someone’s payment is missed by mistake, they must wait until the next payment cycle.

Situation 3: An employee may have been hired for certain tasks and while he /she delivered their services, the organization’s evaluation was not favorable. As a result, the organization has full right to delay payment until the scope of work is duly fulfilled.

Situation 4: An employee is working where a union exists, and the union is on strike as a protest against management. In such a stand-off between the union and management, even non-union employees may have to suffer the consequences of conflict. The organization may refuse to make wage payments until the workers surrender their demands.

I am writing to you after much deliberation and pain about an issue I am facing. It has been over two months that I have not received any wage for services rendered. I continue to work hard and complete my tasks; however, lack of wage is now causing me much mental stress and I am unable to concentrate at work.

I understand that the company is going through a financial crisis and period of uncertainty; however, the truth is that I and many others like me still have to afford rent and bills. I had a small amount of savings that I have been using over the past 2 months to survive. Now that saving has also depleted. Please look into this matter with high priority as there are many like me who have been suffering due to unpaid wages.

I hope you can look into the matter and resolve this issue.