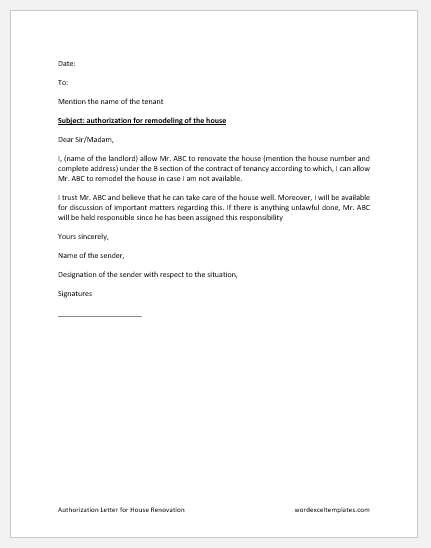 We often need people’s authorization when we want to do something that directly or indirectly impacts them, and they have a legal right to stop us from executing such tasks. Taking authorization is also a legal action that shows that you not only respect the law but also the rights of the other person.

What is authorization for a house renovation?

Why it is important to write the permission letter?

In general, a clause is specified in the agreement of tenancy that assigns a responsibility to the owner of the property to make arrangements for the house renovation by either getting himself involved or by giving authority to the residents of the house.

When to write the letter of authority to the tenant?

Different situations necessitate it for the house owner to come up with the permission letter. Some of these situations are:

Things to remember before writing a letter of authorization:

Writing this kind of letter is not a difficult step. However, one needs to be extra cautious so that it can be ensured that there is no risk involved in this.

Following is a sample letter that has been written by a property owner to the residents of his property to approve them of the repairing of the house.

Mention the name of the tenant

Subject: authorization for remodeling of the house

I trust Mr. ABC and believe that he can take care of the house well. Moreover, I will be available for discussion of important matters regarding this. If there is anything unlawful done, Mr. ABC will be held responsible since he has been assigned this responsibility

Name of the sender,

Designation of the sender with respect to the situation,