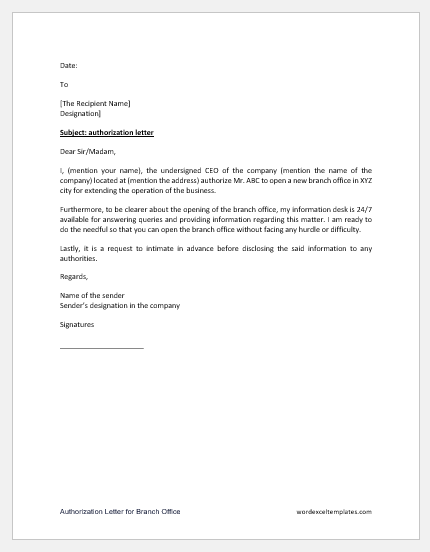 What is an authorization letter?

The authorization letter is a kind of permission letter in which one person allows the other person to take certain actions or perform duties that the person authorizing could perform by himself but cannot due to some reasons.

Who writes the permission letter?

It is important to keep in mind that not every person has the authority to write this letter. Only those people can write this letter who have a certain kind of position or authority to allow someone to do something on their behalf. In some cases, people have to request permission, and then if they have a genuine reason, they receive the permission.

In some cases, there are a series of actions to be taken in a branch office. For instance, a branch manager can write a permission letter for the branch office so that the office remains working smoothly even when he is not around.

When to write the permission letter?

There are some situations in which the person cannot perform a set of actions because of his unavailability or health issues. In such situations, this letter can be drafted when:

Some people don’t know how they can get the tasks completed when they are not even around. Writing a letter to designate their authority to someone is the best way to deal with such situations. Tips given below can be helpful:

The sample authorization letter for the branch office

Furthermore, to be clearer about the opening of the branch office, my information desk is 24/7 available for answering queries and providing information regarding this matter. I am ready to do the needful so that you can open the branch office without facing any hurdle or difficulty.

Lastly, it is a request to intimate in advance before disclosing the said information to any authorities.

Name of the sender
Sender’s designation in the company