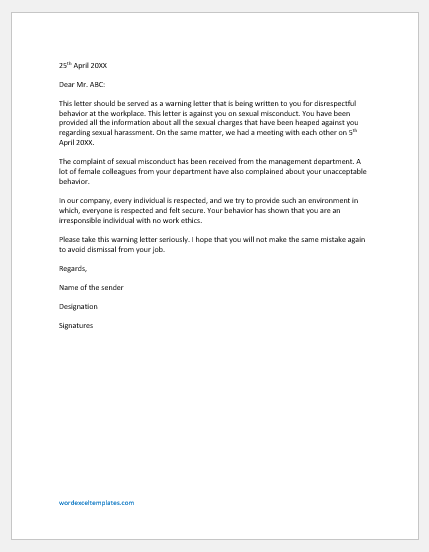 Misconduct of any kind at any place is unacceptable. Therefore, different policies and regulations have been devised to avoid people from getting involved in the misconduct. There is a very offensive type of misconduct which is known as sexual misconduct.

What is sexual misconduct warning letter?

A sexual wrongdoing letter is a kind of letter written in a professional setting when someone is found guilty of sexual lawlessness. This can be in any form or shape. However, no matter in which form it is, it is unacceptable. Every company considers wrongdoings of every type and then devises policies so that they can be dealt with appropriately.

What is the purpose sexual crime warning letter?

Human beings are entitled to mistakes. Generally, they are admonished upon doing anything wrong so that they can refrain from doing it again. In this way, the warning letters are written with the sole purpose to correct the behavior of the person who has been seen involved in misconduct. The warning letter is also used as an information letter that lets the employee that the company can take strict actions against him if he does not correct his behavior. People who involve in sexual abuse believe that their act is not on the lookout and therefore, they can easily escape. Writing the warning letter lets them know that things are not as simple as they seem to be.

Tips for writing the warning letter to someone engaged in sexual offense:

In a warning letter, very important information is communicated. So, it is imperative to know how we can write an effective warning letter. Considering this, below are some useful tips for you:

This letter should be served as a warning letter that is being written to you for disrespectful behavior at the workplace. This letter is against you on sexual misconduct. You have been provided all the information about all the sexual charges that have been heaped against you regarding sexual harassment. On the same matter, we had a meeting with each other on 5th April 20XX.

The complaint of sexual misconduct has been received from the management department. A lot of female colleagues from your department have also complained about your unacceptable behavior.

Please take this warning letter seriously. I hope that you will not make the same mistake again to avoid dismissal from your job.

Name of the sender