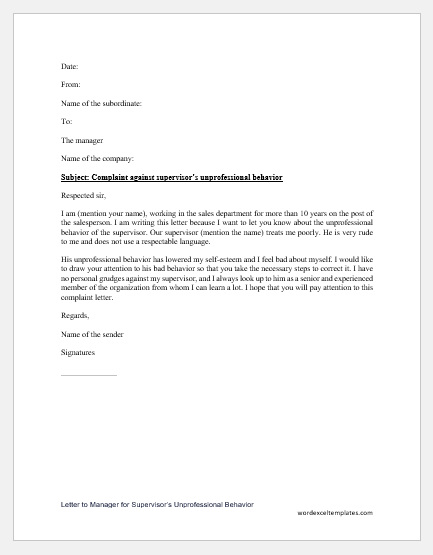 People who are new to the organisation have to work under the supervision of someone more experienced and knowledgeable than them. The person who supervises the team and steers in the right direction is known as the supervisor. The supervisor has lots of responsibilities to fulfil and just like any other employee in the company, it is his responsibility to act professionally. If you feel that your supervisor is not acting professionally and upsetting you with his bad behaviour, you can write a letter to the manager to report his bad behaviour.

What is the letter regarding the supervisor’s unprofessional behaviour?

Why it is important?

In any organisation, supervisors have a very critical role to perform. Those who don’t act up to the expectations of the company fail to supervise their team well. When this happens, their team fails to deliver. So, the manager needs to know about the supervisor who is slightly off the track.

In addition, you are not entitled to tolerate the rude behaviour or abusive language of any person no matter where you work. If you feel that you are not being given the respect you deserve, you can simply ask the manager to take the situation into his hands.

It is a very critical and challenging task to write a complaint letter against someone you work with. S, you need to be careful with your choice of words, the tone you use and the content you provide to the reader.

Give your and supervisor’s introduction

When you start the letter, make sure you don’t miss giving your and your supervisor’s introduction. This will help the reader know which supervisor you are referring to. Don’t forget to mention the name of the department.

Describe the unprofessional behaviour of the supervisor:

Tell the reader how you found the behaviour of the supervisor to be inappropriate. Make sure that you don’t use such words in your letter that show that you have some sort of personal grudge against him. If you have any incident in your mind that you can write about to explain your complaint, go with it. Make sure you don’t write a too-long letter with lots of bad things about the senior.

Tell the manager what you want:

Inform the manager that you want him to take action on this matter you are referring to.  Also, clear to the reader that you don’t hold onto anything against the supervisor and that you respect him for his seniority.

In the end, make a statement that you are looking forward to a quick resolution of the issue you are facing. Also, explain that you will never belittle all the hard work of the supervisor that he has put in to build a strong team.

I am (mention your name), working in the sales department for more than 10 years on the post of the salesperson. I am writing this letter because I want to let you know about the unprofessional behavior of the supervisor. Our supervisor (mention the name) treats me poorly. He is very rude to me and also does not use a respectable language.

His unprofessional behaviour has lowered my self-esteem and I feel bad about myself. I would like to draw your attention to his bad behaviour so that you take the necessary steps to correct it. I have no personal grudges against my supervisor and I always look up to him as a senior and experienced member of the organisation from whom I can learn a lot. I hope that you will pay attention to this complaint letter.