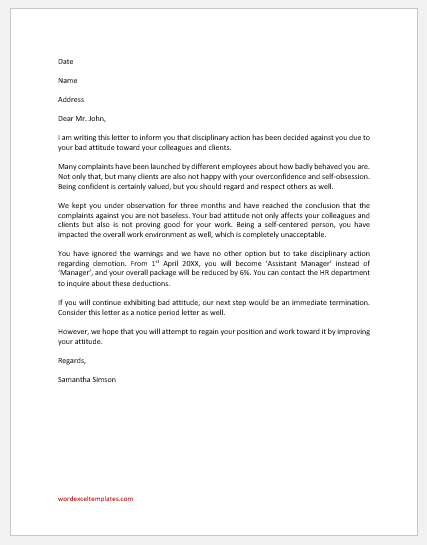 A disciplinary action letter for bad attitude is a letter that is issued by an employer and is addressed to an employee, who has exhibited a bad attitude toward colleagues and clients in official settings. Organizations cannot tolerate any sort of unprofessional behavior, as it affects the atmosphere and interpersonal relationships among employees, which in turn impacts the whole organizational productivity, effectiveness, and efficiency.

Employees may act badly because of different reasons, such as:

Usually, companies have strict policies against employees who do not behave professionally. When an employee shows a bad attitude toward others, complaints are often launched against him. In such cases, and even if no complaint is filed, if bad behavior is reported or observed, an inquiry committee is set up to investigate the issue.

If the employee is found guilty, disciplinary action is taken against him to punish him, rectify his behavior, and set an example for other employees. When a decision is made, the culpable employee is officially notified through a disciplinary action letter, that entails all the relevant details. Although the information included in such letters may vary from situation to situation and company to company, the general details are:

Usually, the organizations do not immediately take disciplinary action against an employee and issue oral and written warnings initially. However, if the warnings do not prove to be a rectifying measure, strict action is taken, which is a huge thing for the employees, as it affects their evaluations, overall career paths, and reputation. These letters are also kept in the employee records, which can be used as a reference anytime in the future as well, which is why the employees are often afraid to receive such letters.

I am writing this letter to inform you that disciplinary action has been decided against you due to your bad attitude toward your colleagues and clients.

Many complaints have been launched by different employees about how badly behaved you are. Not only that, but many clients are also not happy with your overconfidence and self-obsession. Being confident is certainly valued, but you should regard and respect others as well.

We kept you under observation for three months and have reached the conclusion that the complaints against you are not baseless. Your bad attitude not only affects your colleagues and clients but also is not proving good for your work. Being a self-centered person, you have impacted the overall work environment as well, which is completely unacceptable.

You have ignored the warnings and we have no other option but to take disciplinary action regarding demotion. From 1st April 20XX, you will become ‘Assistant Manager’ instead of ‘Manager’, and your overall package will be reduced by 6%. You can contact the HR department to inquire about these deductions.

If you will continue exhibiting bad attitude, our next step would be an immediate termination. Consider this letter as a notice period letter as well.

However, we hope that you will attempt to regain your position and work toward it by improving your attitude.