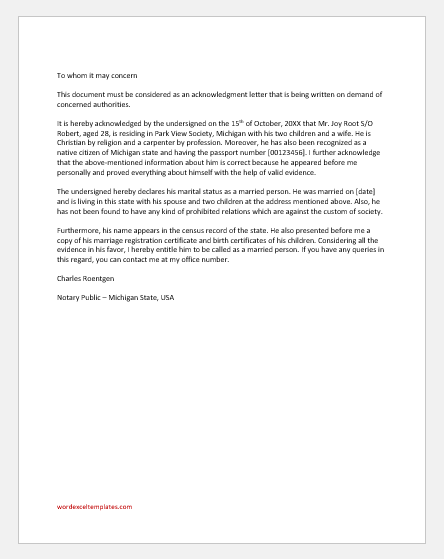 An affidavit is a serious document. This is a sworn statement that is in writing. It is made mainly under oath or it can be an affirmation before the authorized magistrate or officer. This is required in different instances in different countries. It may be needed to confirm the marital status of someone.

What is an Affidavit of Marital Status of Married Person?

An affidavit of the marital status of a married person is an affidavit that declares a person got legally married to their spouse on a certain date. It acts like a sworn statement by the person, that they are married. You will usually need to prove the marriage at the time of applying for some foreign visa, or for some accounts and insurance.

What to Include in an Affidavit of Marital Status of Married Person?

If you need to make an affidavit of the marital status of a married person you can consider the below points:

Advantages of the Affidavit of Marital Status of Married Person:

The advantages of the affidavit of marital status of married person are:

When creating the affidavit of the marital status of a married person, you need to remember to do this without any mistakes. It should be done carefully as it is a serious document.

This document must be considered as an acknowledgment letter that is being written on demand of concerned authorities.

It is hereby acknowledged by the undersigned on the 15th of October, 20XX that Mr. Joy Root S/O Robert, aged 28, is residing in Park View Society, Michigan with his two children and a wife. He is Christian by religion and a carpenter by profession. Moreover, he has also been recognized as a native citizen of Michigan state and having the passport number [00123456]. I further acknowledge that the above-mentioned information about him is correct because he appeared before me personally and proved everything about himself with the help of valid evidence.

The undersigned hereby declares his marital status as a married person. He was married on [date] and is living in this state with his spouse and two children at the address mentioned above. Also, he has not been found to have any kind of prohibited relations which are against the custom of society.

Furthermore, his name appears in the census record of the state. He also presented before me a copy of his marriage registration certificate and birth certificates of his children. Considering all the evidence in his favor, I hereby entitle him to be called as a married person. If you have any queries in this regard, you can contact me at my office number.