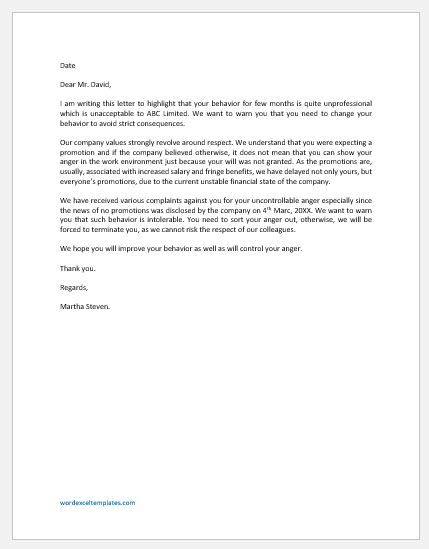 If such a behavior is exhibited by an employee, the employer writes a reprimand letter to an officer for being angry for not getting promoted and shows his disapproval. The information included in such letters may vary as per the company’s policies and the severity of the situation. However, the key parts of the letter must include:

As this letter is a reprimand letter, its tone is quite strict, professional, and formal. It is printed on the company letterhead, and stamped, and signed by the employer.

A reprimand letter also serves the purpose of a warning letter as it warns the employee and states the consequences that may occur if the employee will not improve his intolerable behavior. To avoid strict measures by the company, the employee, usually, improves his behavior after this letter.

In addition, as this letter goes in the employee record book, and can be used for any future reference or for employee evaluation purposes, the employees try to avoid getting such letters in the first place.

I am writing this letter to highlight that your behavior for few months is quite unprofessional which is unacceptable to ABC Limited. We want to warn you that you need to change your behavior to avoid strict consequences.

Our company values strongly revolve around respect. We understand that you were expecting a promotion and if the company believed otherwise, it does not mean that you can show your anger in the work environment just because your will was not granted. As the promotions are, usually, associated with increased salary and fringe benefits, we have delayed not only yours, but everyone’s promotions, due to the current unstable financial state of the company.

We have received various complaints against you for your uncontrollable anger especially since the news of no promotions was disclosed by the company on 4th Marc, 20XX. We want to warn you that such behavior is intolerable. You need to sort your anger out, otherwise, we will be forced to terminate you, as we cannot risk the respect of our colleagues.

We hope you will improve your behavior as well as will control your anger.