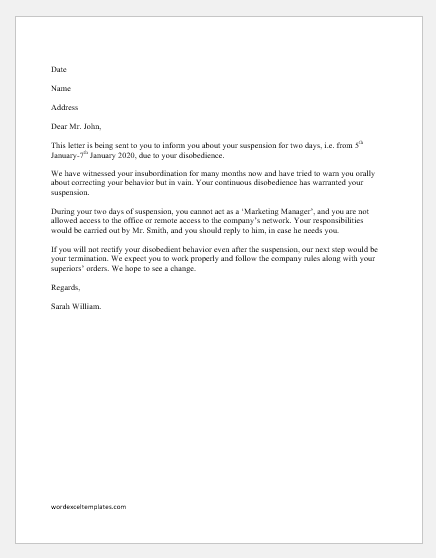 A suspension letter for disobedience is a letter written by an employer or HR department as a notification of suspension. This letter is addressed to the employee who has shown disobedience, and hence, the organization has decided to suspend him temporarily from his current designation in that organization for a certain period so that he would learn his lesson and improve his future behavior.

An employee can show disobedience in various ways. For instance:

An employer cannot overlook or ignore an employee’s disobedience. One, because it hampers the work processes, and secondly, if no corrective action is taken, the other employees might follow the suit, and the overall work culture and environment will get impacted. Usually, initially, the employer tries to give oral warnings, followed by written warnings. Even then, if the employee does not behave well, the employer might suspend him for a certain time, during which, he will not be able to enjoy his designated position in the organization as well as the associated benefits.

The employee is notified about this suspension through a letter, that provides the details to the employee regarding the suspension period and the reason behind the company’s decision. The content of the letter may vary from situation to situation. However, the general details included in such suspension letters of disobedience are:

This letter not only affects the employee’s reputation but is also kept as a record in the employee file for any future reference, which is why the employees avoid getting such letters.

This letter is being sent to you to inform you about your suspension for two days, i.e. from 5th January-7th January 20XX, due to your disobedience.

We have witnessed your insubordination for many months now and have tried to warn you orally about correcting your behavior but in vain. Your continuous disobedience has warranted your suspension.

During your two days of suspension, you cannot act as a ‘Marketing Manager’, and you are not allowed access to the office or remote access to the company’s network. Your responsibilities would be carried out by Mr. Smith, and you should reply to him, in case he needs you.

If you will not rectify your disobedient behavior even after the suspension, our next step would be your termination. We expect you to work properly and follow the company rules along with your superiors’ orders. We hope to see a change.