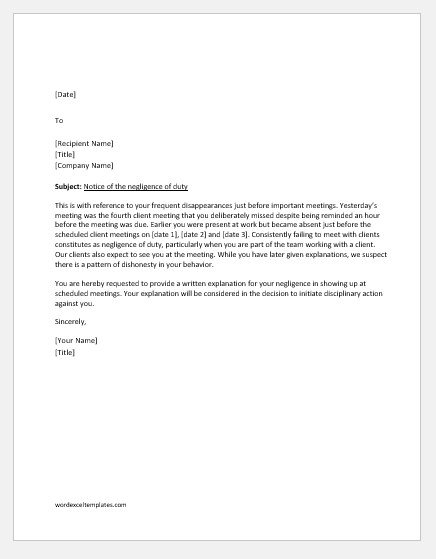 Employees are served a show cause letter after being verbally reprimanded and served multiple written warnings. Employees who show no improvement are thus asked for a strict explanation after which the employer may decide to take disciplinary action against an employee.

Basically, negligence of duty includes any shortfall by the employee in performing their job. However not all negligence lead to show cause notices. Rather a show cause notice is issued when an employee has been persistently negligent or his negligence caused a serious problem or damage to the business.

Subject: Notice of the negligence of duty

This is with reference to your frequent disappearances just before important meetings. Yesterday’s meeting was the fourth client meeting that you deliberately missed despite being reminded an hour before the meeting was due. Earlier you were present at work but became absent just before the scheduled client meetings on [date 1], [date 2] and [date 3]. Consistently failing to meet with clients constitutes as negligence of duty, particularly when you are part of the team working with a client. Our clients also expect to see you at the meeting. While you have later given explanations, we suspect there is a pattern of dishonesty in your behavior.

You are hereby requested to provide a written explanation for your negligence in showing up at scheduled meetings. Your explanation will be considered in the decision to initiate disciplinary action against you.