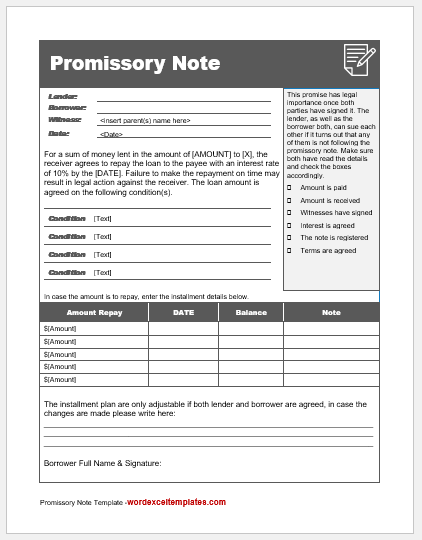 In the professional world, it is very common to lend and borrow money. However, trust is the most important factor when someone lends money to a borrower. It is natural for a lender to feel insecure while lending money to a person who he does not know professionally or personally. In some situations, it becomes essential to allow someone to use their money, especially in a case when there is a guarantor who persuades the lender to lend the money. So, in this situation, the person allowing someone to use his money writes a promissory note on behalf of the borrower.

What is a promissory note for lending money?

It is a promise in the form of a written statement that is also used as a contract between the lender and a borrower. This promise has legal importance once both parties have signed it. The lender, as well as the borrower both, can sue each other if it turns out that any of them is not following the promissory note.

Who writes the promissory note?

In general, the promissory note is written by a person who needs money. He makes a promise in this note that he will return the money by a specific date. He also promises to return with interest. However, if the borrower is not in the position to write the promissory note, the lender writes it and then gets it signed by the borrower. This note is also a promise from the lender and the borrower that they will abide by the terms and conditions and will try to deal with each other with honesty.

Is it important to use a promissory note?

Even if you have a very strong relationship with the borrower, it is always necessary to get a promissory note. They are very useful when you want to have a strong and clear record of the loan. No matter whether you are a lender or someone who borrows money, this note is going to protect you in the long run.

When you take the initiative to use it, you give a message to the other party that you like to make a fair deal with others and you don’t like not having things recorded. The other party also feels peace of mind because they come to the realization that you are not going to nudge them and ask them to return the money before the defined deadline.

What are the key attributes of a professionally written promissory note?

If you want to protect your money and your legal rights, you should make sure that the promissory note you have written has the following key attributes:

When you are promising regarding money you have lent, you should know that there is no condition. A promise with a condition is not a promise. Therefore, give a clear statement that shows that you are being honest and that your promissory statement is clear.

You should mention the exact amount of money you are giving to someone. There should not be any approximation of the amount you are lending because it is going to create a lot of problems in the future. If you have added the interest amount to the total amount, mention it separately, and don’t forget to mention the percentage of interest that you have imposed on the money you have given to the borrower

You should get the promissory note signed to give it a legal position in the world. When you sign it yourself or get it signed by the other party, make sure that a pen or a marker with non-erasable ink has been used.

The promissory note is a piece of document that includes the promise to return the money that is being documented, the date by which the money should be returned, and the signatures of the parties involved. There should not be any other detail in this note. If you have a lot to document, you can use a legal agreement for this purpose.

I, XYZ, make a commitment to lend an amount of $10,000 to John Doe, the resident at House 6, Street 123, ABC Colony. The amount shall be paid on the 15th of January 203X. Repayment is to be by Mr. Doe in full amount by the 30th of August 203Y with an interest rate of 2%. In case of non-payment by the mentioned due date, legal action will be taken against Mr. Doe.

For a sum of money lent in the amount of (mention amount) to XYZ, the receiver agrees to repay the loan to the payee with an interest rate of 10% by the 20th of December, 203X. Failure to make the repayment on time may result in legal action against the receiver.