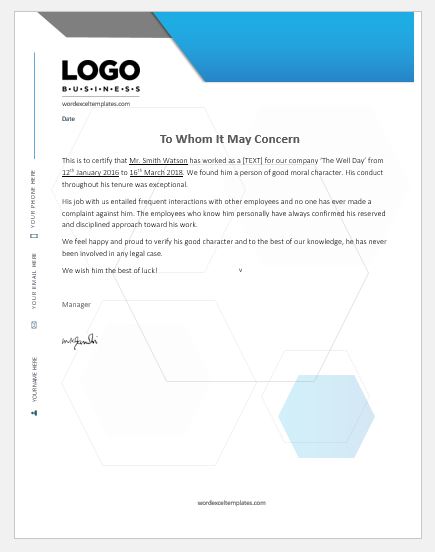 What is a character certificate?

A character certificate is an official document that denotes and verifies the good moral character and conduct of a person. This document certifies the behavior and conduct of a candidate during a period spent in an institute or organization or even a country.  It is often required as a prerequisite by different organizations such as universities, companies, financial institutions, government, embassies, etc.

Formats of the certificate

There are various types of character certificates. The common types are:

Character Certificate Statement for an Employee

To Whom It May Concern

This is to certify that Mr. Smith Watson has worked as a [TEXT] for our company ‘The Well Day’ from 12th January 2016 to 16th March 2018. We found him a person of good moral character. His conduct throughout his tenure was exceptional.

His job with us entailed frequent interactions with other employees and no one has ever made a complaint against him. The employees who know him personally have always confirmed his reserved and disciplined approach toward his work.

We feel happy and proud to verify his good character and to the best of our knowledge, he has never been involved in any legal case.

We wish him the best of luck!

Character Certificate Statement for a Student

This is to certify that ‘Name of student’, Son/Daughter of Father/Mother/Guardian of ‘Name of Parents or Guardian’ has been attending ‘Institute Name’ for the past ‘Number’ years. ‘Name of Students’ was found to have followed every code of conduct during his/her time at our institute.

S/he has never been involved in any misconduct with either the institutes’ staff or among their peers. His/her peers have confirmed the great discipline and working drive with which ‘Name of Student’ have attended ‘Institute Name’.

Without a doubt, we can verify the disciplined character of ‘Name of Student’. According to the best of our institutes’ knowledge, s/he has never been involved in any unlawful and illegal acts.

We wish him the best of luck! 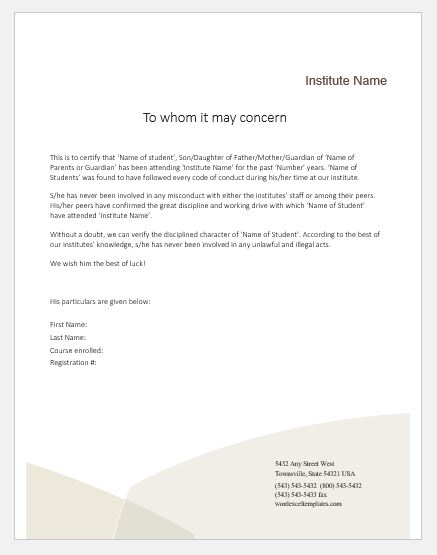 This certifies that ‘Name of concerned person’, Son/daughter of ‘Name of Parents/Guardian’ was born on ‘Date of Birth’, in ‘City, Country’. S/he has been confirmed to be a resident of ‘City, Country’ and have received their education from ‘Name of local institute’ in ‘Dates of attendance’.

We verify that ‘Name of concerned person’ is the citizen of ‘Name of City, Country’ and have never been involved in any legal cases, according to the legal code of conduct of ‘Name of the country’. 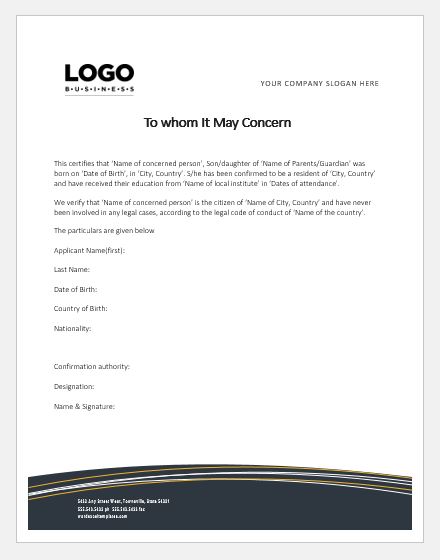 I ‘Name of Writer’, with great pleasure, am providing this letter on behalf of my good friend and colleague ‘Name of Concerned Person’ who has applied for ‘Type of visa’ visa for the ‘Name of Country visa is applied for’, from ‘Name of the current country’.

I am a ‘Citizenship’ who has been working as a ‘Profession’, at ‘Name of Institute’. I first met ‘Name of Concerned Person’ and have been working with him/her for the past ‘Number’ of years. I can, without doubt, verify that s/he has never been involved in any illegal or unlawful act.

In fact, ‘Name of Concerned Person’ is known around the institute and among friends to have a pleasant and well-disciplined character with a strong belief and incorrect work ethics. S/he is a very knowledgeable and wise friend, co-worker and companion, one can depend on.

Furthermore, s/he has always taken a keen interest in the welfare and betterment of the people around us. Due to his/her generosity and polite behavior, s/he has become a very prominent figure among our peers.

‘Name of Concerned Person’ deserves to become a citizen as s/he is already such a valued member of the community s/he currently resides in. I recommend that his/her application is looked at very seriously. If you have any further queries, please contact me on my email [EMAIL] or on my personal cell number [NUM]. 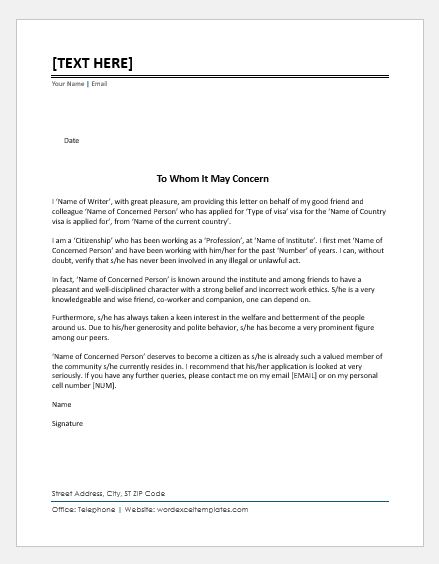