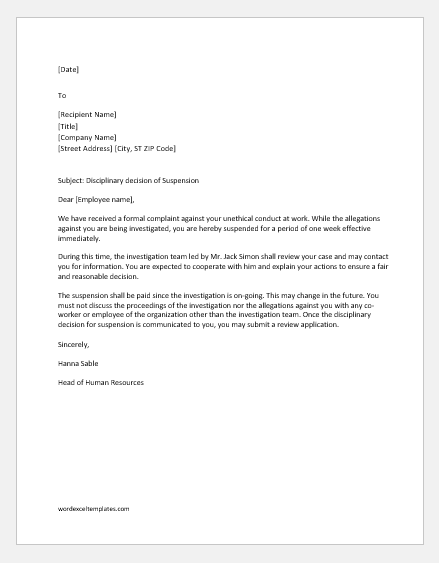 This is to remind you that your suspension period has ended. You should come to work from tomorrow [date]. A copy of the disciplinary action report shall soon be sent to you. 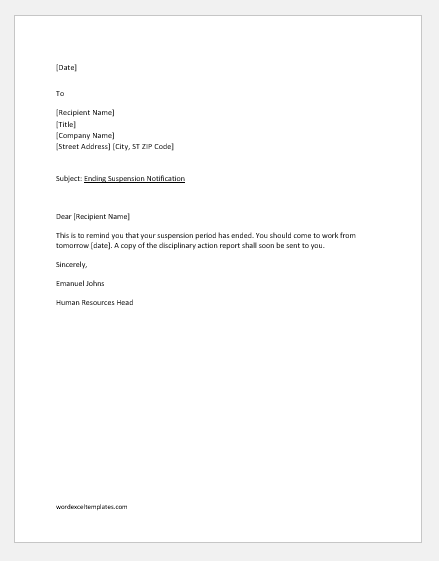 2-Disciplinary Letter on Review of Suspension

This is in response to your application for review of suspension. After careful analysis of the current status of the on-going disciplinary investigation, we have decided to continue with the original decision to suspend you for a period of three weeks.

The details of the investigation report shall be emailed you as soon as they are finalized. You shall report to work at the end of your suspension period that is [date and day]. 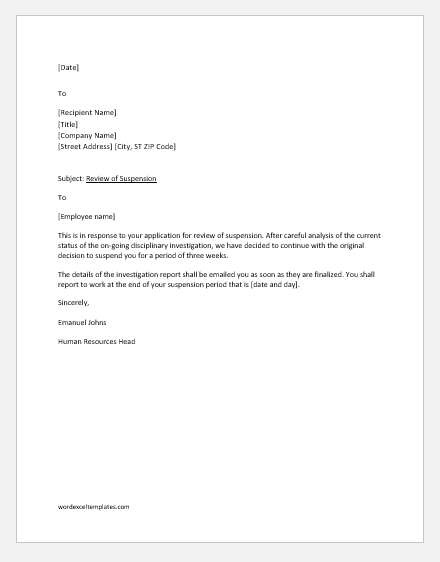 3- Letter of Disciplinary Decision of Suspension

Subject: The Disciplinary decision of Suspension

This is to inform you that you have been suspended without pay for a period of two weeks due to your poor personal conduct.

On September 06, 20xx (Wednesday), you entered into a heated argument with your colleague and threatened to punch him in the face. There have been informal complaints against your aggressive behavior in the past as well. After giving you multiple verbal warnings, a formal complaint was submitted against your behavior. As we discussed in the committee with you, your conduct is unacceptable according to section 103A and 202A.

We at [company name] promote values of respect and tolerance. Under no circumstances are employees allowed to threaten others or disrupt the organizational environment. A similar case arose in 2012 as well when an employee hit another employee after an argument. He was terminated on spot.

You are to resume office on September 20, 20xx. We hope you will mend your ways and improve your behavior towards your colleagues in the future. 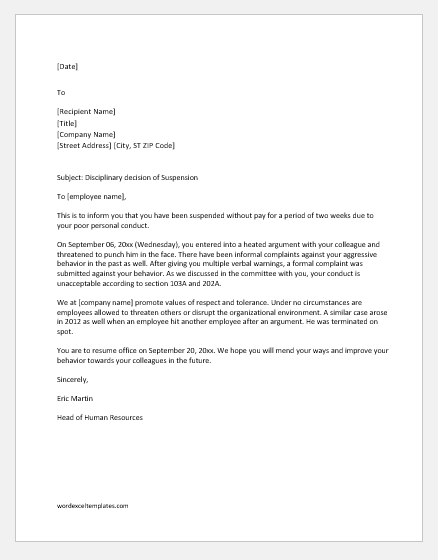 We have received a formal complaint against your unethical conduct at work. While the allegations against you are being investigated, you are hereby suspended for a period of one week effective immediately.

During this time, the investigation team led by Mr. Jack Simon shall review your case and may contact you for information. You are expected to cooperate with him and explain your actions to ensure a fair and reasonable decision.

The suspension shall be paid since the investigation is on-going. This may change in the future. You must not discuss the proceedings of the investigation nor the allegations against you with any co-worker or employee of the organization other than the investigation team. Once the disciplinary decision for suspension is communicated to you, you may submit a review application.