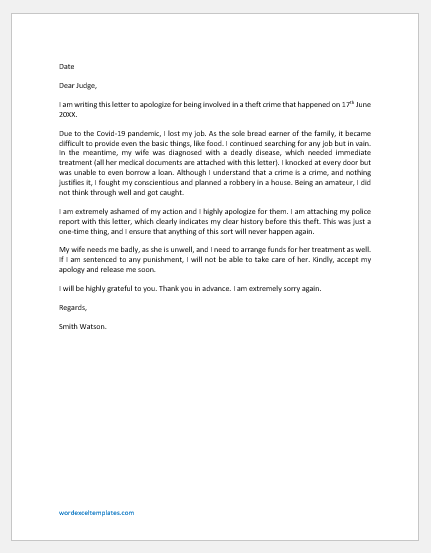 What is an apology letter to judge for theft?

An apology letter to the judge for theft is a letter, that is written by a guilty individual or a convict, who has committed a theft, and wants to apologize for it. This letter is addressed to the Judge, who is handling his case. Sometimes, an apology letter can even be written by someone on behalf of the culprit, but the letter needs to be signed by the guilty party, to indicate that he is sorry, and wants to apologize to the judge for his actions.

In this letter, the lawbreaker attempts to explain to the judge the reason why he committed the crime. Although, a crime cannot be justified, yet the explanation can make his case strong in front of the judge, who may consider accepting his apology. In addition, the convict should strongly request an apology, and convince the judge that any such behavior will not be repeated on his part in the future.

When to write an apology letter to judge for theft?

When an apology letter to the judge for theft is written, its content can vary depending on the severity of the case, requirements of the judge/jury, and the criminal history of the guilty individual. However, generally, the following details are included in such letters:

It is the discretion of the judge, whether to accept the apology or not when he receives an apology letter from a thief. In addition, he may partly accept the apology, which means he might decrease the convict’s punishment after this letter.

However, if the judge, after analyzing the convict’s case, deems the crime as unforgivable, he might reject the apology letter, and punish the thief as per the law. Therefore, it is not certain whether this letter can become significant in the thief’s trial or not. However, it is worth sending it for once.

I am writing this letter to apologize for being involved in a theft crime that happened on 17th June 20XX.

Due to the Covid-19 pandemic, I lost my job. As the sole bread earner of the family, it became difficult to provide even the basic things, like food. I continued searching for any job but in vain. In the meantime, my wife was diagnosed with a deadly disease, which needed immediate treatment (all her medical documents are attached with this letter). I knocked at every door but was unable to even borrow a loan. Although I understand that a crime is a crime, and nothing justifies it, I fought my conscientious and planned a robbery in a house. Being an amateur, I did not think through well and got caught.

I am extremely ashamed of my action and I highly apologize for them. I am attaching my police report with this letter, which clearly indicates my clear history before this theft. This was just a one-time thing, and I ensure that anything of this sort will never happen again.

My wife needs me badly, as she is unwell, and I need to arrange funds for her treatment as well. If I am sentenced to any punishment, I will not be able to take care of her. Kindly, accept my apology and release me soon.

I will be highly grateful to you. Thank you in advance. I am extremely sorry again.