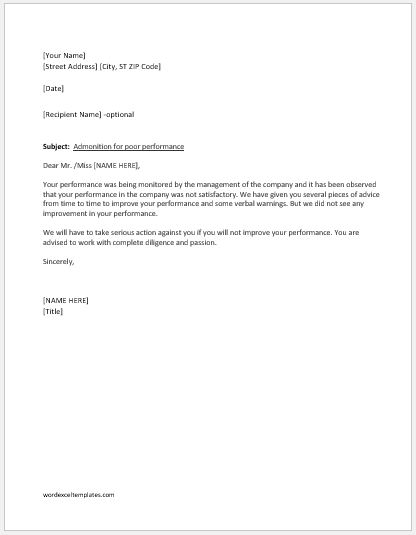 Many supervisors give many verbal warnings to their employees to get the employee’s attention towards their poor performance. When those verbal warnings and discussions are not working, the supervisor can write a written warning letter.

The purpose of writing the warning letter is that the employees take them seriously and they are more likely to improve themselves after receiving a written warning letter.

It is the right of every employee to be warned before terminating from the job. There should be a proper investigation into the poor performance of the employee and then a warning should be issued.

The problem faced by the company because of poor performance should also be described in the letter. Also, describe the impact of the problem on the company.

It should be clearly stated that the employee has failed to show any improvement in his work and the employer is bound to take any disciplinary action if the employee will not improve his performance.

I am writing on behalf of the firm to warn you that your performance has been increasingly bad over the last six months.

You were hired on [date] as [designation]. Your academic record and outstanding performance during the internship period was the reason you were hired. Your performance during the initial years was good, especially the [project name] brought much praise your way and it is the reason you were promoted to [designation]. We had very high expectations from you.

Ever since you were promoted your performance has been falling below the required standard. Your team leader has complained repeatedly of you failing to meet deadlines and your lack of punctuality and frequent absences have affected your team’s efficiency, as a team functions together and anyone falling behind affects everyone else’s work.

Looking forward to improved performance from your side.

I am writing this letter to convey our dissatisfaction with your performance over the last term [year]. You were hired as a chemistry teacher for grade nine after considering your qualification and glowing recommendation letters. Also, you showed promise in the demonstration taken at the time of hiring but the feedback we have received from the students is very upsetting.

They have complained that you do not explain the concepts properly and if they inform you that they have not understood any topic instead of explaining, you encourage them to rote-learn the topic. This is extremely shocking to us as we do not allow rote learning in our school.

You have also been blamed for favoritism which is the most toxic trait a teacher can have. A teacher must always be fair to all the students as her partiality disturbs the student’s learning experience and the class environment.

Looking forward to an improvement in your performance.

We will have to take serious action against you if you will not improve your performance. You are advised to work with complete diligence and passion.