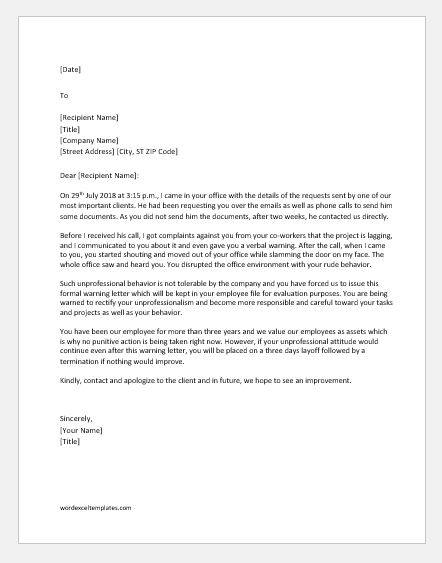 There are certain standards and demeanor set by company policies for the employees to follow. However, when employees do not perform and behave according to those standards, management is forced to take action against them in order to set an example for all the employees that such behavior cannot be ignored. This also helps in creating a culture of professionalism in the organization where employees know that unprofessional behavior will not be overlooked.

There are many types of behaviors classified as unprofessional behavior. Some of the examples are:

When an employee executes an unprofessional behavior, companies try to resolve the issue by making use of informal methods such as verbal advice/warning and counseling. However, if no improvement occurs, the companies issue a warning letter for unprofessional behavior which may be followed by serious punishments or even termination if the issue does not get resolved.

The general format for the warning letter for unprofessional behavior includes details such as:

On 29th July 2018 at 3:15 p.m., I came in your office with the details of the requests sent by one of our most important clients. He had been requesting you over the emails as well as phone calls to send him some documents. As you did not send him the documents, after two weeks, he contacted us directly.

Before I received his call, I got complaints against you from your co-workers that the project is lagging, and I communicated to you about it and even gave you a verbal warning. After the call, when I came to you, you started shouting and moved out of your office while slamming the door on my face. The whole office saw and heard you. You disrupted the office environment with your rude behavior.

Such unprofessional behavior is not tolerable by the company and you have forced us to issue this formal warning letter which will be kept in your employee file for evaluation purposes. You are being warned to rectify your unprofessionalism and become more responsible and careful toward your tasks and projects as well as your behavior.

You have been our employee for more than three years and we value our employees as assets which is why no punitive action is being taken right now. However, if your unprofessional attitude would continue even after this warning letter, you will be placed on a three days layoff followed by a termination if nothing would improve.

Kindly, contact and apologize to the client and in future, we hope to see an improvement.