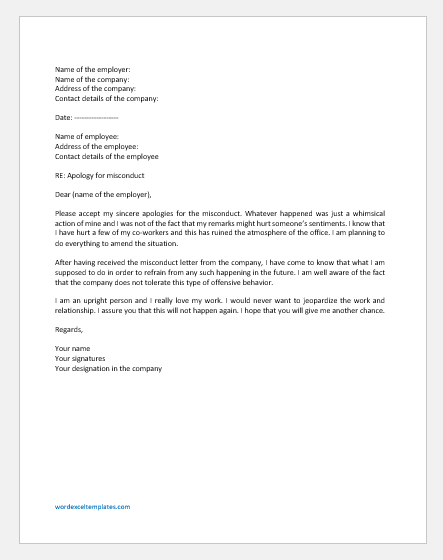 A letter of misconduct is written by the boss to his employee when the employee does not show compliance with the rules of the company. There are different rules and policies that every organization implements. Every person working in that organization is required to abide by those rules. Those who don’t follow those rules are deemed to have been indulged in misconduct.

Sometimes, the misconduct is due to some very basic ethics such as abusing someone, having a spat with one of your colleagues, and much more. When misconduct occurs, the boss writes a letter to his employee asking him to give an explanation of the misconduct or warning him.

What is response letter to boss for misconduct?

This is a letter which is written as a reaction to the misconduct letter written by the employer to his worker initially. The employer often asks the worker to show up with an explanation through a response letter. In this situation, it is required by the employee to write this letter.

Importance of writing the response letter after misconduct

When you do something immoral at the workplace or you don’t act appropriately, you must apologize for your behavior. Sometimes, your boss does not need your apology but an explanation of why you acted in that particular way. Whether you have to write an apology or explanation, you can do it with the help of a response letter. Through this letter, you make your boss know that you understand the kind of misconduct you involved yourself in. This letter also enables your boss to know that you are also aware of the repercussions of the misconduct.

It is important to write this letter because when you admit your mistake and apologize, you are likely to be forgiven by your boss. There are chances that your boss might ask you to amend the situation.

It is important to write a letter with the right tone. For example, if you are writing an apology statement in the letter, make sure that you write a sincere apology. Your tone in the letter should be genuine.

The content of this response letter must include the information regarding the misconduct that you have done. This will give a realization to the employer that you are aware of the misconduct.

Format of the response letter of misconduct letter

When you write a letter to your boss, you should be aware of the format and the structure of the letter. Knowing the format means that you know which detail to add first. This letter should be begun by adding the apology statement and then bring up the misconduct and your plan to fix it.

Detail everything in the letter appropriately and in a concise manner.  Make sure that you don’t add irrelevant detail in the letter and make it unnecessarily long.

RE: Apology for misconduct

Dear (name of the employer),

Please accept my sincere apologies for the misconduct. Whatever happened was just a whimsical action of mine and I was not of the fact that my remarks might hurt someone’s sentiments. I know that I have hurt a few of my co-workers and this has ruined the atmosphere of the office. I am planning to do everything to amend the situation.

After having received the misconduct letter from the company, I have come to know that what I am supposed to do in order to refrain from any such happening in the future. I am well aware of the fact that the company does not tolerate this type of offensive behavior.

I am an upright person and I really love my work. I would never want to jeopardize the work and relationship. I assure you that this will not happen again. I hope that you will give me another chance.

Your name
Your signatures
Your designation in the company