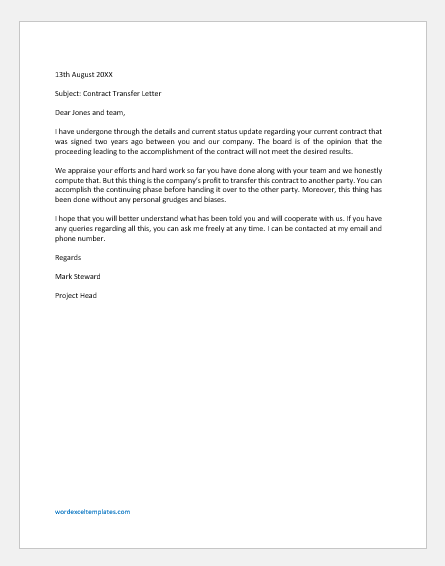 Most often based on numerous reasons, the contracted head feels it suitable and has the urge to consign the contract from one party to another. There could be its surfeit reasons. Most of the time the party with the contract has been signed is not able enough to conclude and accomplish the right results, the most noteworthy one. Or its reason could be that the direction given to the other party is executing different results than the expected one.

When someone is not fulfilling on expectations and not deals with the right directions then such an exigent situation can be demeaning for the head. The current letter sample deals with the same issue and how to write it in a proper way.

The first way to deal with it is to have a sit down with the relevant authoritative person and two-three more people of the same designation and if not of the same then with the one having enough experience and exposure to discuss the matter.

A detailed discussion with the existing and upcoming party about what so far has been done on the contract with all its strategies and particulars touched and how it can get benefits. The current contract party can be given 2 or 3 weeks to accomplish the continuing juncture if it is the center of nowhere.

If you are working with another party despite having the current party, then you must notify them of this change by taking them in confidence that why all this was necessary for the signed project. Introducing your new contract holder is of great significance here.

It can be quite strenuous for the old party by handing over their contract to another party and a new party can also go through under pressure because of high expectations and the probabilities of failure. It can turn fruitfully if the contract’s head magnanimously meets the new party. This thing will eradicate the perturbation caused by the burdensome work of the contract. Keeping the objectives and record straight and welcoming new parties will lessen the confusion further. Hence, the new party will feel saluted and ready to work with great enthusiasm.

After done with basic things, by writing a letter to concerned parties and telling them of this change you can make all this legal and formal. While writing all this keep this thing in mind to the only state the facts preventing from the notion of prejudice and humiliation.

I have undergone through the details and current status update regarding your current contract that was signed two years ago between you and our company. The board is of the opinion that the proceeding leading to the accomplishment of the contract will not meet the desired results.

We appraise your efforts and hard work so far you have done along with your team and we honestly compute that. But this thing is the company’s profit to transfer this contract to another party. You can accomplish the continuing phase before handing it over to the other party. Moreover, this thing has been done without any personal grudges and biases.

I hope that you will better understand what has been told you and will cooperate with us. If you have any queries regarding all this, you can ask me freely at any time. I can be contacted at my email and phone number.