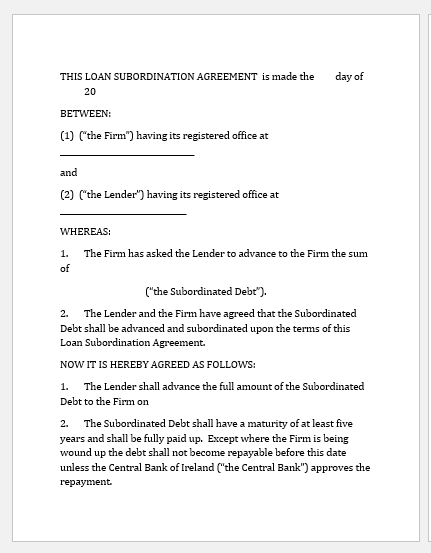 What is an agreement?

The acceptance of particular rights and obligations of all the parties involved is brought in the written form of a document which is known as agreement. The agreement binds both parties to perform several duties and also refrains from doing several things.

When an agreement is signed between two parties, there is a meeting of minds. The agreements are usually signed when all the parties involved in the agreement have a common purpose. There are also several compromises that are required to be made by the involved people or parties when they get into a written agreement.

The agreement has a lot of importance since they are legally binding documents and they don’t let any of the participants violate the rules and regulations set by the agreement.

What is the format of an agreement between the two parties?

There is no specific format to be followed when it comes to creating a professional looking agreement. The format generally depends on the type of agreement you are going to sign. In general, the agreement includes the title of the agreement at the top.

How to do I write an agreement letter?

Make sure that you have explained the purpose of writing this letter well. All the things which are required to be done after getting into the agreement should be stated. Terms and conditions should also be mentioned in the agreement letter.

How do you write a contract?

A contract is such an element which is enforced by the law of the country. One should be more careful while writing the contract because whatever details are mentioned in the contract get the legal value once they are signed by the parties involved.

You can write an effective contract once you get the information about how to write the contract.

What are the legal agreements?

Legal agreements are commonly known as contracts which are called legal because they are enforceable by the law.

The legal agreements have a lot of importance because violating the terms and conditions mentioned in legal contracts allow the injured party to access the courts for compensation of loss.

What is a letter of understanding and agreement?

Letter of understanding and agreement is another type of agreement document which is used to document all those negotiated points related to the agreement which were discussed verbally earlier.

The main purpose of this letter is to review all the details about the services, terms, conditions and a lot more which have already been agreed upon by the parties involved in the agreement. The main details that are added to this letter are:

In different countries, the letter of understanding and agreement is given too much importance due to the benefits they come with.

Must you need an agreement to start a business?

You are not needed to have an agreement with anyone if you are going to start your own business solely.

However, if you are going to start your business with a partner, you must sign an agreement with your partner. There are different situations in which you may need a partner to start a business with you.

You may need a partner to invest money in the business. Sometimes, you are needed to get a partner because you don’t have adequate knowledge about running the business. No matter, what the case is, it is always recommended to start a business with your partner after signing an agreement so that you can protect your rights.

Agreement templates for MS work and PDF are available on the internet for those people who don’t know how to draft an agreement in a professional way.

These templates allow the user to edit them according to the needs of the user. For example, if the user wants to add another clause in the agreement, he can easily customize the template to make it more suitable for your business.

Most of the agreement templates are prepared in MS Word and PDF format as they are easy to edit and use. Moreover, the user can print them very easily.